The Life and Times of President George Washington’s Teeth

Many years before becoming the very first president of the United States of America, George Washington lost his first tooth to decay. According to his personal diary entries the the year was 1756 and he was only 24 years old. The extraction was preformed by a “Doctor Watson”. Unfortunately, that doctor was not the same Watson that aided a certain prolific literary character.

Throughout his life, President Washington struggled with orthodontic and dental issues. His successor and friend President John Adam’s notably exclaimed that it was the constant cracking of Brazil nuts that claimed Washington’s teeth. Though chomping on hard foods can be stressful on you teeth, modern doctors say the rapid decay was likely due to the consumption of mercury oxide, a compound that was commonly used to cure illnesses like smallpox and malaria. 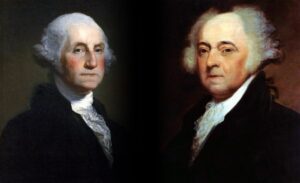 By April 30th 1789 the historic day of his presidential inauguration Washington had only one tooth remaining! A single premolar hung on for dear life. Sadly, that remaining tooth succumb later the same year and he began wearing full dentures. That last tooth was gifted to his close friend and dentist Doctor John Greenwood.

President Washington wore several sets of dentures over the years, but most surprisingly NONE of them were wooden. He had teeth made of hippopotamus ivory, brass, gold and even other human teeth, but no wood!

To learn more about some interesting figures in dental history consider visiting The National Museum of Dentistry in Baltimore, Maryland.